Now, knowing what you do, when I say Rod Tidwell, you probably say…

SHOW ME THE MONEY!

There in his modest kitchen, dancing, jacking his body, holding that now-antique cordless phone, giving his agent Jerry Maguire a singular marching order.

Do you remember that scene? If you’re over 18 and have had access to basic cable, you must. It’s a great scene, and it still holds up 20 years later.

For those who don’t remember, here are the basics:

Rod is a young, talented, cocky wide receiver for the Arizona Cardinals, and Jerry Maguire is Rod’s agent.

For much of Rod’s career, Jerry has been a “super agent,” focused on tending the needs of the biggest stars of professional sports. Clients like Rod Tidwell – good, but not great players – would get the leftovers of Jerry’s time and attention.

But when nearly all of Jerry’s clients are poached by a rival at his agency, Rod is the lone hold-out who stays with Jerry. And this gives Rod some serious leverage with Jerry.

“Show me the money” is such a memorable movie line. But writer-director Cameron Crowe expected – perhaps better said, hoped – that a different catchphrase would emerge from Jerry Maguire.

Recall that the “Kwan” is conceived in the Cardinals’ locker room. Jerry Maguire is talking to Rod, who’s still in the shower, about Rod’s contract negotiations.

Rod steps out of the shower, naked as a jaybird, and criticizes Jerry for just “talking,” while his peers, other NFL All-Pro receivers, are making the “big, sweet dollar… they are making the Kwan.”

“Hell yeah that’s my word. You know, some dudes might have the ‘Coin,’ but they’ll never have the Kwan.” Rod is still air-drying.

Jerry starts to ask, “What is –“ but Rod anticipates his question.

“It means love, respect, community, and the dollars too. The entire package. The Kwan.”

Jerry pauses. And then, upon reflection, says: “Great word.”

Despite Crowe’s high hopes for the Kwan, audiences were lukewarm – “pleasant, at best” – when screening the Kwan scene (Premiere Magazine, 2000). It’s hard to compete with the hilarious call and response of “Show me the Money!” Even Nick and Tom’s dear, departed Grandma Ruth loved saying that line.

As it turns out, Jerry Maguire isn’t really about football. And it’s only partly a love story, even though “You had me at hello” remains a cinematic signpost to this day.

What’s Jerry Maguire about, really? The search for meaning in the world of money. What we do for a living; why we do it; and what we aspire to in our professional lives.

Recapturing some lost meaning in the world of money is what prompts Jerry’s sleepless night in the movie’s opening moments. It’s the fuel behind his “mission statement.”

Other people reject his vision, and Jerry’s subsequent downward professional spiral is steep. In a fit of desperation, he launches his new agency. And that’s what sparks Dorothy Boyd (Renee Zellweger’s character) to trade her stable secretarial job at the big sports agency for the chaos of Jerry’s start-up.

Finding meaning in the world of money is at the heart of the conflict in Rod Tidwell’s character.

On the one hand, he is driven by “Show me the money!” The desire to amass it, flaunt it, and center his life’s work around that pursuit.

On the other hand, he is called to pursue the Kwan, a shopping cart of aspirations so eclectic – “love, respect, community, and the dollars too” – that Crowe had to invent the word because, tellingly, the concept didn’t already exist in our contemporary American lexicon.

Re-watch Jerry Maguire, and you see people act badly, underhandedly, immorally, contrary to their best selves, when their money doesn’t reflect their values. 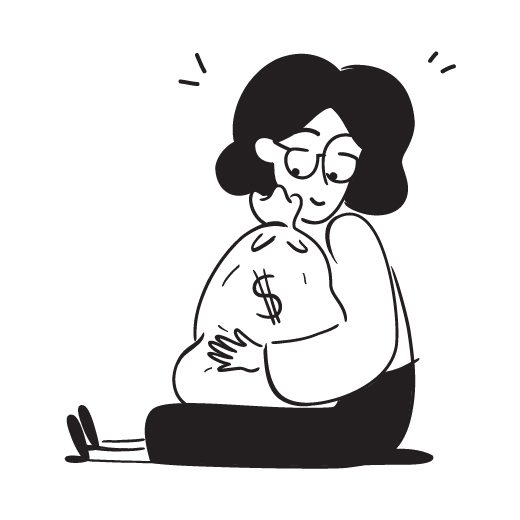 Money for the sake of money is what “Cush,” the presumed savior of Jerry’s fledgling agency and the number one pick in the NFL draft, is focused on. Cush’s father assures Jerry that they’ll stay with Jerry’s agency – but then they ditch Jerry without a word of warning.

Money for the sake of money is what “Show me the Money” Rod Tidwell is all about.

In a climactic scene, Jerry and Rod, now friends as much as client and agent, are arguing. Rod’s frustrated that despite a great season, he still has not received a contract extension. Jerry tells Rod:

“I’ll tell you why you don’t have your ten million dollars yet. Right now, you’re a paycheck player. You play with your head, not your heart.

“Your personal life? Heart. But when you get on the field, it’s all about what you didn’t get, who’s to blame, who underthrew the pass, who’s got the contract you don’t, who’s not giving you your love.

“You know what? That is not what inspires people. Just shut up, play the game. Play it from your heart. And you know what? I will show you the Kwan. And that’s the truth.”

To which Rod says, “Quit using that word, Kwan. That’s my word!”

As opposed to an attitude of “Show me the money,” money in service of the Kwan – money as one crucial component of the good life – is the journey that the movie’s main characters, Jerry and Rod and Dorothy, all take in one way or another.

The Kwan is only attainable when money is an expression of authenticity, of one’s true self.