During the last week, Park Piedmont has written two Special Comments regarding the major financial issue of the day, which is the negative impacts of the newest coronavirus on the health, economic activity, and stock prices around the world. You will note the first one dated February 25th focused on the percentage declines of the S&P 500 index during five earlier periods of significant  contagious disease outbreaks, also noting that other factors come into play over any extended time period measuring stock prices; and the second, dated February 27th, focused on the number of stock price corrections and bear markets since 1945, regardless of the apparent causation, and the time it has taken for prices to recover from those declines. Both Special Comments noted that portfolio percentage allocations away from stocks reduce the impact of the price declines on client portfolios.

For these Monthly Comments we would like to first note that the impacts of this new virus, and the efforts to contain its adverse health impacts, have created significant economic issues, as businesses around the world have had to curtail their normal activities, creating all sorts of problems for those consumers and businesses dependent on their goods and services. One apparent result of these problems has been declining stock prices, especially in the context of very recent (mid-February 2020) historically high stock prices, with historically low ten-year US Treasury yields, and unusually high price earnings ratios. By the end of February, the S&P 500 was down more than 12% from its recent mid-February high (a correction is defined as a decline of between 10 and 20%), and ten-year US Treasury yields declined to 1.16%, (P/E ratios are hard to come by as earnings estimates keep changing based on the news about the spread of the virus).

For our PPA clients, we advise on allocating manageable portions of their investment portfolios to stocks, behaving as long-term investors looking to grow their portfolios at rates above low interest rates, and the rate of inflation.  What we avoid is acting as traders, who seek to profit from short-term price movements by being in the markets when prices are rising, and out when they are declining; or less common, selling stocks short and then trying to buy back at lower prices;  both trading activities (referred to as “market timing”). As appealing as market timing appears, the record shows it is extremely difficult to make two correct decisions- the time to sell, and the time to buy back in.  Further, there may be costly tax consequences when selling stocks with substantial unrealized gains in non-retirement accounts.  Consider the following information: 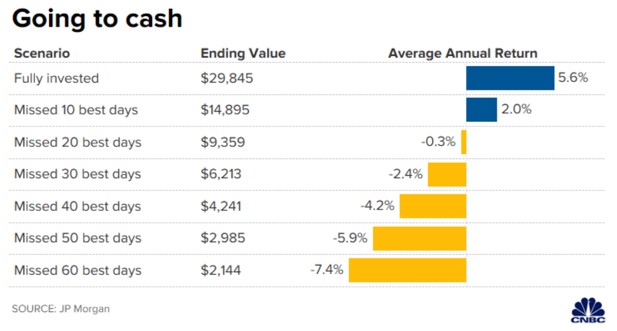 The article continues… “still, declines like the one investors experienced this week rarely feel good. And maybe you’re getting queasy about the economic implications of an outbreak that could force millions of Americans to shut themselves in for awhile. If so, remind yourself of the following: stocks are how your savings fight inflation, the market is not an absolute proxy for your personal finances, and you’re playing a long game.  (Our note: this is true even of 70+ year old clients who may need their money to last through their 90s, and/or who want to pass money to family and/or charities.  As Lieber puts it “if you are on the cusp of retirement, keep in mind the big idea is to live at least 20 more years, which is usually plenty of time for stocks to bounce back from even an extended decline in the stock market, referencing the decade of 2000 to 2010, when stock prices made no upward progress.”)

The article then discusses the difference between market timers and long term investors, and observes that “owning a big basket of stocks and paying very little for the privilege, via an index mutual fund or exchange traded fund is generally the best way to execute this long term strategy.”  One topic not discussed in this article is how an allocation away from stocks moderates the impact of declining stock prices, which is a major point of emphasis in PPA’s work for our clients.

While we should all be aware that history may not repeat itself, and that the history we know is only one description of events that have happened, as compared to all those other versions that could have happened, PPA’s view is that all the history we present to support a point of view is at least worthy of consideration.   In the absence of a better indicator, we repeat our consistent bottom line suggestion: stay the course and think long-term.